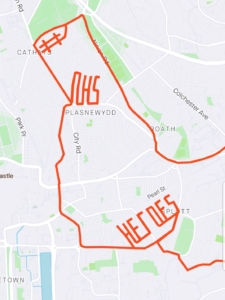 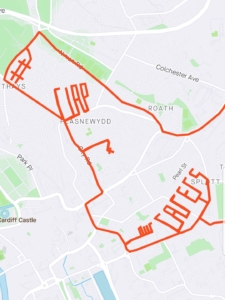 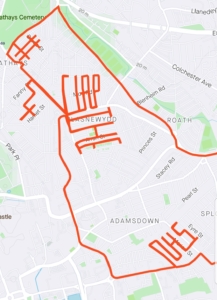 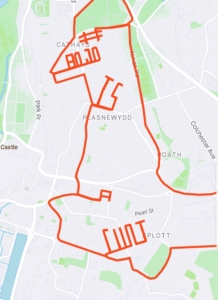 My Real Strava Art was borne out of frustration of the government’s handling of the COVID-19 pandemic. Their failure to act quickly and decisively cost many lives and put many more at serious risk.

“I was at a hospital the other night where I think there were a few coronavirus patients and I shook hands with everybody, you will be pleased to know, and I continue to shake hands. People obviously can make up their own minds but I think the scientific evidence is… our judgement is that washing your hands is the crucial thing”

It became fairly obvious to me that the Conservative Party’s response to COVID-19 would be a PR exercise. The sight of Dominic Cummings (surprisingly his real surname and he’s a grade A wanker so rather apt), running from No. 10 set alarm bells ringing for me.

Mr. Cummings is the chief political advisor to the Prime Minister. Sounds fancy but he is pretty much a spin doctor.

During the Brexit referendum campaign, Cummings was the ‘man’ behind the controversial and untrue claims and promises which were sprawled upon a campaign bus and billboards. The claim was:

The billboards backed this rhetoric up with:

The only downside was that it was bullshit, but it played a massive part in winning the vote for the Brexiteers.

Mr. Cumdumpster also attended Scientific Advisory Group for Emergencies (Sage) meetings. This is the independent body which advises the government on its COVID-19 response. I’m not sure how its independence and integrity could be maintained with the PMs right hand man present?

Dominic Cumswapper, or Mr. Feltcher as he is occasionally known is also reported to have said words to the effect that the economy comes first (just like Dom) and if some pensioners die, so be it. It’s only fair to point out that Mr. Cumbucket denied he had said this.

The entirely orchestrated event of Mr. Cumlover ‘sprinting’ from No. 10 with his man bag over his shoulder and the look of a man who had forgotten to buy his wife an anniversary gift was nothing short of comical.

Boris had tested positive for coronavirus, and within a week or so, our fearless leader was admitted to hospital for precautionary reasons. Fair enough. He didn’t look 100%, but as the lazy fucker doesn’t use a comb (or birth control), it’s hard to picture a healthy Boris.

I was prepared to give Boris the benefit of the doubt for now and hoped he had a speedy recovery.

Then came the news that Boris was being rushed to intensive care…again as a precautionary measure.

The UK media was hooked. I’m just amazed that each news bulletin didn’t end with the EastEnders ‘doof doofs’ drums to intensify the cliff-hanger moment.

Tune in this time tomorrow to find out…and now the weather.

Then came the news that Boris was close to being ventilated. Does this mean the doctors are going to open a window to let the Boris skank out or the more traditional medical method of intubation of the airways and the use of a mechanical ventilator?

It seemed the latter, although I suspect the medical advice included the words that we should ‘crack the window open a touch, you know, in the interests of national security’.

A day or so passed and Boris is back on the ward and then home…to spend time with his heavily pregnant partner. Seems like a completely wise plan for recovery. The NHS advise pregnant women to avoid contact with anyone with symptoms of COVID-19. I’m not sure if this advice extends to the Prime Minister and his wife/partner/scandal/significant other.

Don’t worry, it gets worse.

Then followed the revelations that the NHS saved Boris’ life. It was touch and go as to if he would survive.

Then it slightly changed to it was 50/50 as to whether he would be ventilated. He wasn’t, so it turned out to be 0 chance of being ventilated.

So, here we have a COVID-19 patient presenting with mild symptoms. Things get a bit ‘sketchy’ and the patient is admitted to hospital, then intensive care, then back to the ward and then home without any invasive life saving procedures at all…although it is reported that Boris received 4 litres of O₂. I genuinely feel sorry for the oxygen.

Then came the clap for our carers campaign. At face value, this was a perfect demonstration of gratitude to those people risking their lives by helping others, but it was somewhat hijacked by the government and Mr. Cummingsonmyface to send a political message that the Conservative government is behind the NHS.

The same government that has ripped the backbone out of our health service to sell to private companies.

The same government that has reduced healthcare budgets and overseen the closure of several hospitals.

The same government that has left our frontline NHS staff without vital PPE supplies during a global pandemic…even though they were warned to stock up in the event of a viral outbreak.

The same Conservatives that cheered so enthusiastically when their vote blocked a pay rise for NHS nurses.

Utter bollocks Mr. Cummings (shit, his real surname is actually worse than the others).

Some suggested this enthusiastic celebration of the NHS was to divert attention from the shambolic government handling of the pandemic.

I originally wanted my real Strava art to be a positive message of support to the NHS. Our brave nurses and doctors deserved some appreciation. I then started to think about the carers, keyworkers and anyone else working selflessly and at great personal risk in order to protect the people who were infected with COVID-19 or vulnerable to infection. Whilst lockdown revealed some extremely shitty aspects of human nature with hoarding and just being a general cunt, so many other people were going out of their way to volunteer to deliver food, medication as well as being on the end of a phone for someone to talk to.

Most people clapped for our carers every Thursday at 8pm, but the message was being diluted by government spin about the NHS being more important than ever. Let’s not forget that this government failed to protect NHS staff with adequate PPE.

My fake Strava art needed little, to no preparation. Most of the time and effort was required post-ride, but real Strava art required a little planning.

After many hours of looking at local towns and built-up areas on Google Maps, I managed to identify parts of Cardiff that seemed to have the perfect street layout in order to spell short words using GPS.

I created a new route each week to convey a new message, but riding the routes presented another challenge. I had not ridden on some of these areas that I had earmarked, so for the first couple of attempts I had to ride around holding my phone on the bars to make sure I stuck to the route. That may not sound particularly demanding but considering the state of the roads, it was actually quite draining. More so as I had to ride up and down certain streets several times so that the words were legible. I’ve no idea what people would’ve thought seeing me ride up a road, then suddenly turn around for no reason, then ride up a side-street, turn around again to come back on the original street!

For 3 consecutive Thursdays, I posted messages of support to the people who were truly deserving of the support.

The take home message from the real Strava art was left for the final Thursday, which coincided with the date that Annemarie Plas, the founder of the Clap for Carers movement said it was time for ministers to reward our keyworkers. The message itself was fairly simple:

#BoJo is a cunt

*This puts the UK 5th on total deaths per country, which is the highest number of deaths for countries in Europe.

The UK is 5th on number of deaths per one million population. 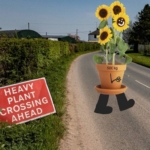 File under something else… Fake Strava Art 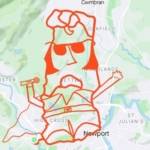